Previously we looked more closely at the Bitcoin Difficulty and what it is. Now we will take a closer look at the ‘hash rate’, what it is and also what it means for the decentralization of Bitcoin.

As we mentioned in the article on the bitcoin difficulty, a ‘hash’ is the output of a hash function, and the hash rate is the speed a single computational action needs to complete an operation in the code. For mining purposes, the higher the hash rate the better, because it increases the chance of finding the next block and thus receiving the block reward. The blocks are like mathematical puzzles; the mining machines have to make thousands or even millions of guesses per second to find the right answers to ‘solve’ the block.

While all are very important for blockchain technology, this article will specifically focus on decentralization.

Bitcoin was designed as a decentralized alternative to fiat money and therefore was created to not have any single point of failure, making it more resilient, efficient and democratic. Its underlying technology, the Blockchain, is what allows for this decentralization, as it offers every single user the opportunity to become one of the network’s many payment processors. 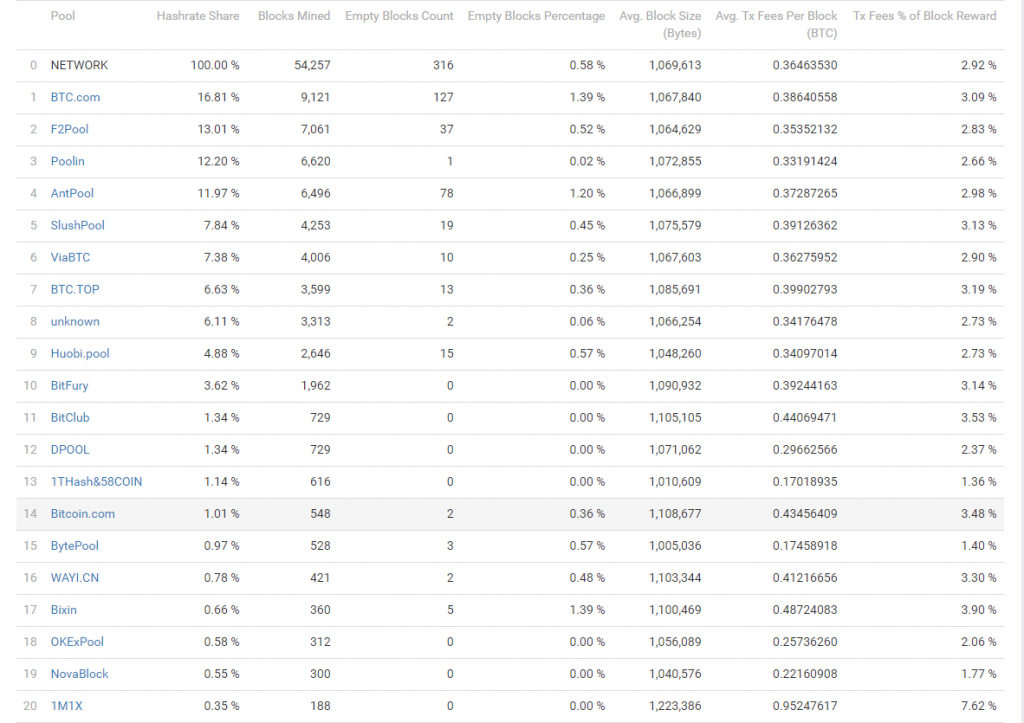 Above you can view the 20 most largest BTC Mining Pools for the whole 2019. https://btc.com/stats/pool

For Bitcoin to be decentralized it should not have a single actor control a large part of the network. As we can see from the information gathered from btc.com, the top 5 mining pools of 2019 are:

Mining pools are desirable to the average miner because the reward is equally split among all the participants according to their contributed mining hash power and the frequency of the rewards is much more stable. Therefore, miners that don’t have a lot of hashing power can still get a stable mining reward. Unfortunately, the concentration of hashing power in the mining pool gives more power to those pools. The higher the % share of hashing power the easier it theoretically is for potentially bad actors to collude.

Therefore, it is very important to choose which mining pool to use. There are various Bitcoin mining pools, smaller ones, and bigger ones, it is important to always think and keep decentralization in mind before choosing which to use.

PrevPreviousRenewable electricity and CO2 emissions in the United States
NextWhat is the Bitcoin Halving?Next