A hash is the output of a hash function, and the hash rate is the speed at which a single computational action is completing an operation in the code. The higher the hash rate the better, because it increases the opportunity of finding the next block and receiving the block reward. This principle is precisely what cryptomining is; it constitutes finding blocks through complex computations. The blocks are like mathematical puzzles; the mining machines have to make thousands or even millions of guesses per second to find the right answers to solve the block.

Hashrate is calculated in hashes per second (h/s): 1000 hashes = 1 kilohash (KH/s), 1000 kilohashes = 1 megahash (MH/s), 1000 megahashes = 1 terahash (TH/s), 1000 terahashes = 1 petahash (PH/s). The number of miners in the Bitcoin network increases the difficulty, as a miner needs to compute more guesses per second. The difficulty level is fundamental because regardless of how much mining power there is, the block generation time is kept at 10 minutes. It will adjust every 2016 blocks, that’s around every 2 weeks. If the previous 2016 blocks took more than two weeks to find, the difficulty is reduced and vice versa. Profitability changes as well because of it. In the following examples, we will demonstrate exactly how the block reward and profitability changes when the difficulty increases.

The previous ATH (all-time high) of bitcoins difficulty was on the 27th of August 2018, with a total of 61,866,256 TH/s. At this difficulty level, an ASIC miner such as Antminer S17 with 56TH/s computational power and 2520W power consumption with an electricity price of $0.05 kW/h would be rewarded around 0.072 BTC in a month.
– What To Mine Bitcoin Profit Calculator
– Blockchain Hashrate 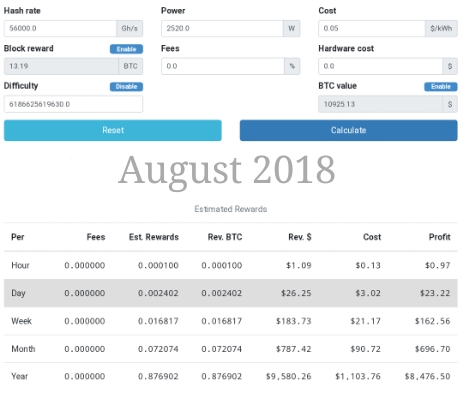 Bitcoin’s difficulty chart has recently reached a new ATH of 79,347,132 TH/s, the 30th of June 2019. This is approximately a 128% increase from the previous August 2018 ATH. It means that it will be harder to find and mine one block on the blockchain. As more computational power is utilized, more electric power is requested. At the current difficulty levels, the estimated monthly reward is around 0.056 BTC as you can see in the picture below.
– What To Mine Bitcoin Profit Calculator 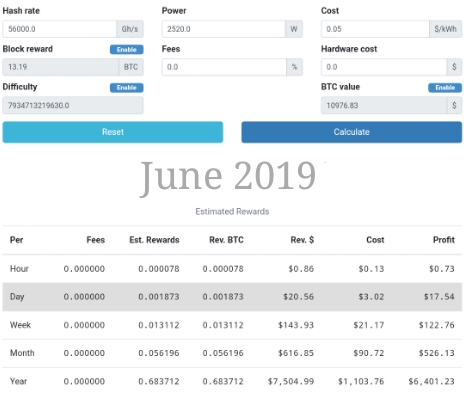 As for monthly bitcoin rewards, we see a ~22% decrease because of the 128% increase in difficulty at the ATH. These numbers are only for one ASIC miner, but on a larger scale, for example, a mining farm with 1000 mining rigs, that’s a reward decrease of 16 BTC in a month. Having competitive electricity prices is therefore very important to consider since there are a lot of extra costs like maintenance and potential difficulty swings. Having low electricity prices affords the deployment of new machines and an increase in hash power.